おしゃらんどファンテージ (Known as "Fantage Japan" by Overseas Users) was the Japanese release for Fantage. The site was closed down worldwide on December 15th, 2010.

In December 2009, Nexon Co. Ltd announced that they have signed a contract with Fantage. Nexon agreed to distribute the browser game developed by Fantage in Japanese starting in February.[1] This browser game was developed for kids to enjoy Fashion, being Fashionable, chat, and make friends. Furthermore, the game was targeted to younger Japanese girls, so it had:

Fantage Japan did not have any Premium Members or any concept of Premium Membership possibly because it was still in the beta stage of development. Signing up for an account required a Nexon Japan ID. Creating a user was similar to signing up in the original site during 2008-2010.

Some items left over from the beta period of the original site were available. Event items from Orion's Return were Rare Items in Fantage Japan. The NPCs, as well as the rest of the Fantage Japan, were given new moe appearances as seen in store catalogs and pictures.

A famous feature in Fantage Japan was the creation of two sets of eyes. In the original Fantage, the eye sets are known as "Ocean Turquoise Eyes" (boys) and "Crystal Blue Eyes" (girls). The eye sets were originally from Fantage Japan, and both the Ocean Turquoise Eyes and the Crystal Blue Eyes were available for girls in the website. A few costumes from Fantage Japan also made their way to original Fantage site later, but they were edited when they were introduced there. Another feature in Fantage Japan was the ability to buy more than one of the same item, though there was no way to sell the duplicate items. This concept did not arrive into the original Fantage until November 2012.

On November 3, 2010, Nexon Japan made an official announcement[2] on their website stating that the website would be terminated the following month. Fantage Japan was closed worldwide on December 15, 2010. If someone tried to access the site, they would get a sign from Nexon regarding the website's termination. No reason was given on why the site closed down, but it was most likely due to their contract with Nexon Co. Ltd ending.

As of 2015, the original URL became a redirect to a notice page regarding the services termination, different to the one in December 2010 with a similar message.

Girl on the front page

Michelle as shown on the Le Shop catalog in Fantage Japan 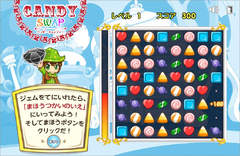 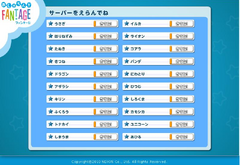 Server selection of Fantage Japan. The servers are named after animals. (うさぎ、イルカ、きつね、etc) 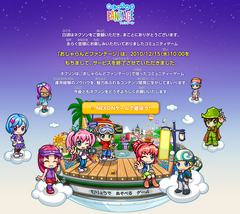 Sign regarding the termination of the site in December 2010

Creating an account in Fantage Japan.
Add a photo to this gallery

Retrieved from "https://fantage.fandom.com/wiki/Fantage_Japan?oldid=20219"
Community content is available under CC-BY-SA unless otherwise noted.