Civic_Princess is a Fantage User. She was the first user on Fantage to reach level 1000.

Civic_Princess gained popularity for various reasons, Including her Fantage Blog, her invites, and she was also featured in Fantage's Blog and The Comet many times. She began being recognized by many Users, and achieved attention from many people, long before the opening of the Hall of Fame. The Hall of Fame strongly affected Civic_Princess's popularity, to the point where her Popularity caused her trouble in Fantage; being surrounded by large crowds where ever she went, and other Users would pose as her. She is still viewed as one of the most popular users existing on Fantage even now.

Civic_Princess claimed to have quit Fantage more than once on her YouTube channel , but she was still seen active at various times. In August 2011, Hall of Fame runner up Pinkstardust took her position as 1st place, and shortly after Civic disappeared from the Hall of Fame. She was last reportedly spotted early 2013 when she was seen in the Legends part of the Hall of Fame wearing Valentine 2013 Limited Items. Because of this, people assumed she was still playing Fantage, but she has not been reportedly seen since. In January 2013, Jen uploaded a video on her YouTube page, on which she claimed "[She's] not going anywhere". During most of 2013 and the following year she was barely reportedly seen around Fantage at all. It is assumed she stopped playing.

Civic_Princess visited Fantage again during the first 2 months of 2015 with Red_ninja. She later clarified that it was not her, and that her account had been hijacked. 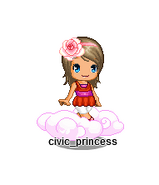 Civic_Princess in a fashion show.
Community content is available under CC-BY-SA unless otherwise noted.